How do we know what the local landscape looked like before European settlement? One helpful resource are the public land surveys of the 1830’s which defined boundaries for the sale of land parcels. Marlin Bowles, Plant Conservation Biologist at the Morton Arboretum, analyzed them extensively. He found that Cook County was approximately 66% prairie and 27% timber (i.e. wooded land). Of the timbered land, 65% was open savanna or savanna; 15% was woodland; and 20% was forest. The fire-tolerant species – white oak and bur oak – were dominant everywhere and white oak, our Illinois state tree, was the most frequently occurring species of oak.

Writings from early settlers speak of grassy, open woodlands where one could see 400 yards distant and could drive a buggy through the woods. They wrote glowingly of the profusion of wildflowers in the prairies; groves dotted with shrubs, wild grape and other berries; and an abundance of wildlife supported by the rich land.

But things have changed in the last couple of centuries. Fire suppression—an element necessary for healthy prairies and woodlands—and an infestation of plants brought from overseas, have allowed woodlands to become brush-choked and dark. European buckthorn is so aggressive it is 5 times more abundant than the next most common tree in the Chicago region* and kills off grasses, wildflowers and oak saplings in its shade. In the absence of fire, native trees such as maple and basswood also became more dominant, creating a dense shade with the same damaging effect as buckthorn. A multitude of sun-loving native plants needed by wildlife died out and became replaced with weeds, creating lifeless zones. Oak saplings have become so rare due to shade that ecologists are concerned about their future.*

An important first step in returning our woodlands to a healthy, functioning state is to get sunlight back on the ground. Sunlight gives native plants the energy needed to thrive, flower and set seed. Removing buckthorn and thinning aggressive native saplings to a healthy balance allows oaks and other native shrubs, grasses and wildflowers to flourish and reproduce. 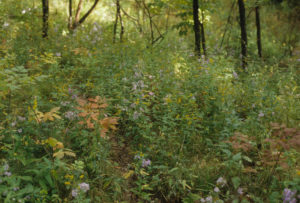 Wildflowers in an oak woodland

The contrast between dense thickets of buckthorn and more open woodlands is striking. The ground underneath a buckthorn, green ash or maple thicket is bare and risks soil erosion. But in the dappled sunlight of a healthy woodland, grasses and sedges thrive, forming a matrix that holds the soil and provides the right conditions for a full community of native flowering plants that once flourished. Wildflowers support healthy populations of insects that feed many birds, while those same insect populations pollinate the flowers. Grasses produce seeds that are eaten by small mammals, which then become food for hawks and owls. Oaks saplings can mature. It is this complex network of plants and animals that interact and depend on one another that keeps the system sustainable.