Giants in the Woods 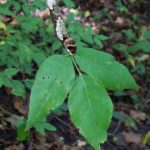 Eastern Giant Swallowtails are one of our largest butterflies. Now is a good time to check out their bizarre caterpillars. Finding them can be tricky as their mottled dark and light pattern has earned them the nickname “bird droppings caterpillar”. Good camouflage! 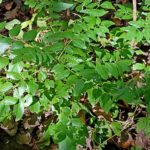 The caterpillars feed exclusively on members of the Citrus family (Rutaceae) and our area has just two native species: Prickly Ash (Zanthoxylum americanum) and Wafer Ash (Ptelea trifoliata). Both are shrubs, not ash trees at all. So much for common names! This cluster of Prickly Ash at Harms Woods had a half dozen or more of the caterpillars of varying sizes. There were lots of munched leaves, clues to their presence. 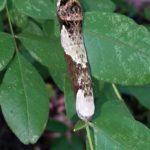 The order Lepidoptera — butterflies and moths — is one of the insect orders that exhibit complete metamorphosis, undergoing four stages of development. In the butterfly it’s egg; caterpillar, chrysalis, adult. This largest cat is likely to soon change into the next stage, overwintering as a chrysalis. As it changes, it produces small glycerol-like molecules that act like anti-freeze. This gives it the ability to “supercool” to temperatures below freezing but without forming cell-disrupting crystals. 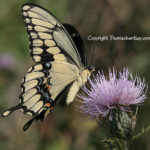 Next spring we’ll be looking for these striking black and yellow butterflies as the adults emerge.